How To Love Living Things
Solo Exhibition by Meg Stein
Opens Friday, May 20th, 6-9pm
Runs May 1-June 4
Show title borrowed from the poem “A Child Without Arms Running Through a Field (Wyoming)” by Rachel McKibbens, published in her book Into the Dark & Emptying Field. 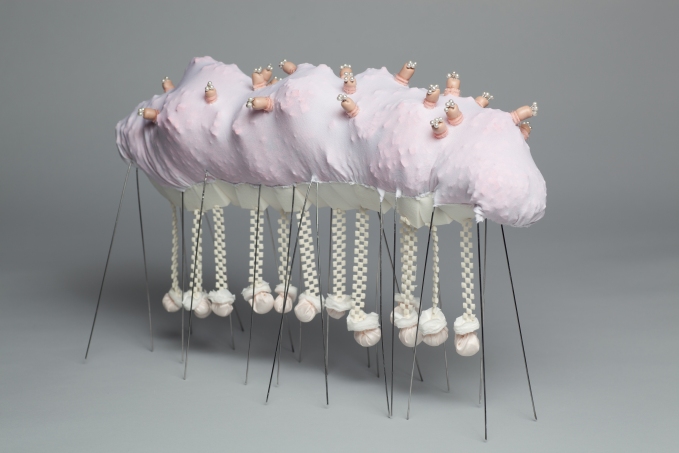 My sculptures transform everyday detritus—loaded with social assumptions about gender and class roles—into bursting, unknown life, complete with ambiguous new gender classifications and power hierarchies that are full of potential. Unsettling interrogations of feminine stereotypes, they collapse the space between comfort and threat.

My work is inspired by an absurd, futuristic vision: Imagine that you leave your household items in the woods with a group of women for five million years and, through their simple labor, the women evolve these items into evocative, feminine oddities, a marriage of wild and domestic.

Propelled by this vision, I dissect and reconstruct household accoutrements into fantastic and psychological sculptural organisms. My work anticipates a sensual, soft-edged world, punctuated by a ‘post-metamorphosis’ of gender roles.

Meg Stein is a sculptor, animator and installation artist from Durham, NC. Most recently her work has been exhibited in Portland (OR), South Carolina, Louisiana, North Carolina, Atlanta, Brooklyn, and Philadelphia. In 2016 she was in residence at Yaddo in Saratoga Springs, NY. She has been an Artist-in-Residence at the Atlantic Center for the Arts in New Smyrna Beach, FL (2014), at “Wetland” by Mary Mattingly in Philadelphia’s FringeArts (2014), a Regional Emerging Artist-in-Residence at Artspace in Raleigh, NC (2014), a resident artist at the Virginia Center for the Creative Arts in Amherst, VA (2015) and an Artist-in-Residence at the Indie Grits Film Festival in Columbia, SC (2015).  She was a participant in New York Arts Practicum in 2014, working with Simone Leigh. In 2012 she won the David A. Dowdy Jr. Award for Sculpture, was nominated for the International Sculpture Center’s Outstanding Student Achievement in Contemporary Sculpture Award (2014), won a merit scholarship for the Ox-Bow School of Art in Saugatuck, MI (2014) and won 3rd place in the National Compact Competition at Louisiana State University in Baton Rouge, LA (2015). She earned her MFA in Studio Art from UNC Chapel Hill in 2014. More information is available at megstein.com. You can contact her at meg.stein.artist@gmail.com.